Welcome to California. Home to the Stars and Govnah Ahnold.

It was early in the evening when a young male came walking up. Business was slow and there wasn't a lot of people out. As he walked up I asked for his i.d. and he pulled out his wallet. He held out his wallet so I could look at the i.d., I didn't even look at it and asked, "Can you take it out of the wallet?"

The guy stood there for a second and I repeated myself. Then he started to pull the i.d. out of his wallet. "This could take forever, it's a new wallet," he said as he struggled to get the i.d. out.

After a couple minutes and a struggle he pulled out his i.d. and handed it to me. Right from the start the i.d. felt very thick. I looked at it close and noticed that it seemed like it had a thick layer of plastic on it. I tried to bend it but it was very stiff and wouldn't bend.

Looking at the picture I could see that it was him but there was no way this was a real California i.d.

The kid went back to his wallet, "Yea, I have a couple credit cards and a..."

"Credit cards aren't i.d.'s. You have anything else with your name, picture and birth date on it?"

"None at all but I can't let you in with this."

"Yea. You can't have this back either. This is fake."

The kid hung his head, turned and walked away without an argument of any kind.

As soon as the i.d. hit my hand I knew something was wrong with it. It felt twice as thick as any other i.d. that I've ever felt. Then after looking at it, it looked very cloudy like there was a film over top of the i.d. The picture and even the lettering looked blurry. 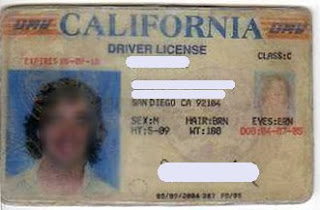 I looked at the picture and it was definitely the person that handed it to me.

The edges of the i.d. were worn down as if it had been around for a long time.

The hologram was very prominent. It stood out over the picture instead of partially blending in with the background.

California is one of the states that can boast about their i.d. being one of the hardest to reproduce. I've never had a good California fake. Most of the fakes I've gotten from California are horrible. They're in the same condition as this one.

After work I decided to do a little experimenting with it. I used my pocket knife to slowly pry the i.d. apart in the middle where it had already started to come apart. Once the knife made it in I started twisting it a little and I thought I saw another face in there. 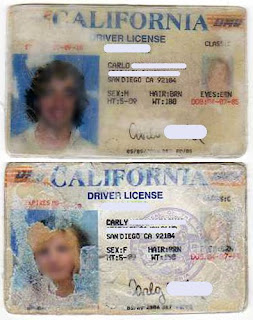 Later, I was able to use a friend's bottle of Goo Gone. After letting it sit for a while the i.d. split in half very easily. At that point it was very easy to see the second face that was under neath.

Surprisingly they both had similar names. Her name was Carly and his was Carlos and they both had the same last name. Although her penmanship is horrible and her signature looks like her name is Carlg.

Maybe they were twins traveling together and he was holding her i.d. for her. All the heat just melted the i.d.'s together? Think that's possible?

Our friend must have had a really good sex change. Or perhaps it was an extremely flat chested female that wanted people to think she was a male?

Then again, it could just have been two really bad fakes stacked together and then shrink wrapped. But what do I know?


I think the story about the sex change would be more interesting.

LOL!!! Well, at least he wasn't too much of a problem. It IS an interesting story. I was never brave enough or interested enough in the nightlife to cop a fake i.d. as a kid so, I love hearing the fake ID stories.

p.s. hopefully you keep my own sg.com domain linked if you do change or add my personal blog. i'm planning on reopening it.