Underage jokes are hilarious. They never make me look at you twice or even consider you might be underage. jackass.
Posted by Unknown at 10:30 PM No comments:

It seems like the crazies are starting to come out of the wood work. Either that or the people reporting the news are ignoring the filters and starting to report on things that we wouldn't normally hear about. Which might be my own little conspiracy theory.

A while back a friend turned me on to the BBC. She told me that if I really wanted to know what was going on in the US then I should get my news from somewhere else. With that advice we got on the subject of how the news is fluffed and not fully reported here. Not until recently did I ever notice American news reports mention the UN. It was always "the US is" instead of "the UN is". No wonder so many people here think we do everything and feel so neglected when no one runs to our aid. There's a lot of people that don't even realize that other countries helped us when 9/11 happened. I do count volunteers flying in from other countries to help clear the rubbish as help.

The US seems to be in a remodeling stage in more of a way than it has during any new President's reign. People are becoming more and more aggravated with new taxes and less jobs to pay them with. Some blame it on bigger corporations outsourcing their production to China and other countries with low production costs. Others blame it on big business actually running our government through donations and lobbying. I believe that one wouldn't exist without the other. Some people are starting to get pretty upset by it all.

Last night a man was so upset he traveled from California to the Pentagon to express himself by opening fire on two security guards when they asked for his credentials. Apparently his parents knew about his mental instability but there's not much you can do when the offspring is 36yrs old and going in an out of jails. Some bleeding hearts might say that the "system" failed him. I don't believe the system should be accountable for people.

Last month a man flew his small airplane into an IRS building. At least this guy had some stable thoughts. He just did it all wrong. Sometimes I believe that people can think about something to such a point that it makes them crazy. It makes them think about it to a point that they believe everything they think to be 100% true. Which brings about the Manifesto of Joseph Stack III. Though some of the thoughts seem to be solid, they are completely one sided and seem to be more reasons for him to believe he hasn't done anything wrong. Maybe it was shame or just pure distaste that made him do it, either way, it's just plane crazy.

These are just two of the crazy things that have hit the national news lately. In local news there has been many other little incidents that you don't hear about. If it doesn't have an effect on the national level it doesn't really get spread out to the rest of us. It does seem that the US is going through some major changes. Whether they'll be good is still to be seen.

As for all the changes and political stances, I'm not getting into all that. I don't want to end up being crazy and crashing my big wheel into any street signs. 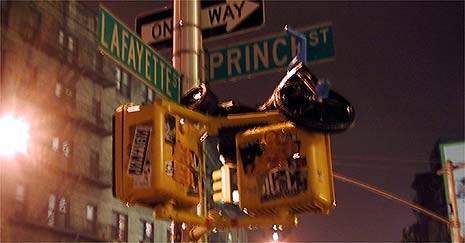 Posted by Unknown at 3:47 PM No comments:

Do you remember that old game Telephone that you used to play way back in grade school? You know, the game where the first person whispers something into the next person's ear and so on until it goes around the whole circle. When it reaches it's way back to the first person it's usually something totally different than what they had said. It usually didn't matter how many people were in the circle, be it 4 or 10 people, the phrase was never what it started out to be.

It's interesting to be there when the rumor begins.

Martin is a good guy. He's been working with me for a few years between different spots. Most people see him as being hyperactive and a little boisterous. I see him for who he is. He's one of those guys that will go out of his way for you without you asking. He'd jump in front of a knife or gun for any person that he thinks is worth it.

At times he's a little over the top on certain subjects. However, if he talks about something or does something that you don't like just tell him and he'll stop doing those things.

One night, as Rachael was taking a smoke break, Martin was hanging out front. He was pushing his stomach out, rubbing it and making remarks about how he's only 3 months pregnant. Rachael was looking over and any person looking at her would think she was laughing to herself. If she was, one would think she was laughing to herself about how stupid Martin was acting.

Martin saw her, took a serious face and asked Rachael, "You like my fat belly?"

Rachael then quit smiling and said, "No."

Martin then replied, "Well.. I like yours." He saw the face that Rachael made and walked over to her. They spoke for a minute and then Martin walked away. As he told me later, he had told her that he was just joking around and thought she looked great.

A few minutes later Rachael is sitting between the bartenders (as she always does now) and told them about the situation with Martin. Which went the same as above except for two things.

The first change was what Martin said after she said no. According to her story he said, "Well, I like your fat belly." Which he did not. It might have been implied but it was not said.

The second change was that Rachael left out the entire part about Martin coming up and telling her that he was joking around and that she looked great.

So there's the great Telephone game from the first person. The remarks from the bartenders were normal. They've always thought Martin was a creep. Why? Because some little person that wants to fit in with the cool crowd changes the story so they can fit in.

I heard Rachael tell the story to the bartenders and spoke up as I tend to do.

"Did he say that in those exact words?"

"Are you sure? Cause I was standing right there."

"Well, not exactly in those words."

"No it's not. Now your just putting extra words in his mouth."

With that being said all I got in return was boo's from the rest of the peanut gallery.

It's all common sense really. If you don't like something change it. Or at least try to change it.

Don't keep drinking every day and sitting around so that your fat belly can get bigger.
Posted by Unknown at 3:03 PM No comments:

There's people I constantly card even though I see them regularly. The ones who's names I can remember so I know who I'm going to ban in the future.
Posted by Unknown at 12:25 AM No comments: