When you work at different places it's good to see familiar faces from the other place. Sometimes it's fun and other times it's not. I guess it all depends on how you handle situations.

After seeing a person at one establishment for months, constantly coming in and drinking, you wouldn't think there'd be a problem with them at a different establishment. Good thing I rarely think in that fashion.

I had seen this girl drink at my other job many times. She was always really nice and always had good things to say. So one night we were talking and she asked if it would be ok if she came to the other place that I worked. Unknowingly, I said that it would be cool if she did.

A few weeks go by and the girl seemed to disappear. I didn't see her at the normal spots.

One night at work a group of girls come walking up and I start to i.d. them. Somewhere in the middle a girl hands me her i.d. and says, "Hey Mike, I'm taking you up on your offer."

The i.d. I can see is fake and then I look up to see the girl's face. There she was. The girl that was constantly drinking at my other job. She had reappeared and now I could either do my job and take away her i.d. or I could just ignore it and let her in.

"What do you mean your keeping that?" She was pissed. "I thought you were my friend. That's why I came here."

"Friend or not, I'm doing what I get paid to do. If I knew you were underage I'd never let you drink in the other place." I didn't work the door at the other place. I just kept an eye on the inhabitants.

"They let me in all the time."

"Not anymore." I slid the i.d. into my back pocket. We had words for about 20 minutes going back and forth. I don't think I've said "No" so many times before.

The next time I worked at the Secondary I mentioned the i.d. to TD.

"Yea, I was up here when she gave Jake the story bout you taking her i.d. away." TD continued, "I asked her why you took it away and she said 'because it was fake'. Jake told her to be quiet and she narced him out for knowing. Dumb Bitch... Had to fire Jake after that." 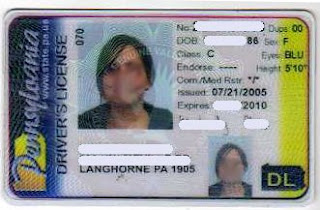 This was a decent fake. It looked real but the hologram once again was the tip off.

A normal Pennsylvania license has a hologram on it that lists off the counties in the state. Which tends to be a pretty normal thing on some licenses.

This one had an eagle with it's wings spread in the middle with the terms GENUINE, SECURE, AUTHENTIC, and VALID going around it. Plus it had wavy lines going around all of that. Definite fake hologram material. 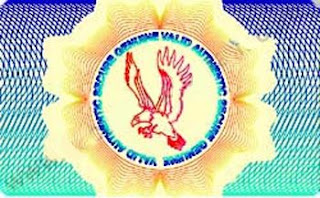 Once again, here's a better picture of what the hologram looks like.

When you compare the two pictures you can slightly see the hologram on the picture of the license.